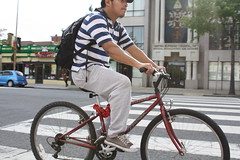 SUN-TIMES MEDIA WIRE July 13, 2012 8:44AM
A bicyclist died Thursday night after she collided with an ice cream truck a few blocks away from her home in the South Side Chatham neighborhood.

The 23-year-old woman was riding a bike in the 8700 block of South Cottage Grove Avenue when she collided with a truck about 8:40 p.m., police News Affairs Officer Hector Alfaro said.

The woman — identified as Caprice Cunningham, of the 8600 block of South Ingleside Avenue, according to the Cook County Medical Examiner’s office — was on a 10-speed bicycle eastbound on 87th Street and crossing in front of oncoming northbound traffic, police News Affairs Officer John Mirabelli said. As she was doing so, she struck the front driver’s side of a 1964 Ford truck, he said.