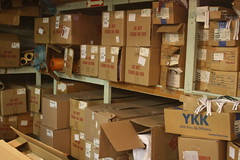 LOS ANGELES (TheWrap.com) – Celine Dion is being sued by a former employee who claims that he was illegally denied overtime compensation by the singer, and says that there are other people in Dion’s employ who’ve been similarly stiffed.

In a complaint filed in U.S. District Court in Florida, Keith Sturtevant, who says that he worked for Dion and her husband Rene Angelil in Florida from 2009 until this June, claims that he never received overtime compensation while working for the couple, despite the fact that he “routinely worked in excess of 40 hours per work week for Defendant’s benefit.”

Sturtevant says that the couple characterized him as an exempt “warehouse manager” but says that’s a lie, “because during the entire time that Plaintiff worked at the warehouse in Stuart, Florida, he was the sole employee there, and thus there was no one to exert managerial powers over.”