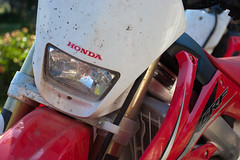 The mother of a motorcyclist who died in an accident last June filed a lawsuit Monday alleging the city was negligent in its placement of a traffic-control device.

The lawsuit filed in Cook County Circuit Court says a sign gave motorists inadequate notice that the southbound lane of Harlem Avenue near the intersection of Myrtle Avenue was closed for construction, contributing to a fatal motorcycle crash.