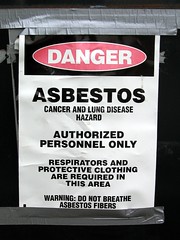 ALEC and ILR have assisted the asbestos industry in covering up the dangers of asbestos, villainizing the victims, misleading the public with propaganda and working to limit accountability through legislation.

H.R. 4369 is part of a campaign to let the asbestos industry off the hook by burying the system in paperwork and delaying justice until victims die:

Asbestos diseases kill nearly 10,000 people every year. The asbestos industry knew of the dangers associated with exposure as early as the 1930’s. Asbestos is still legal in the U.S.